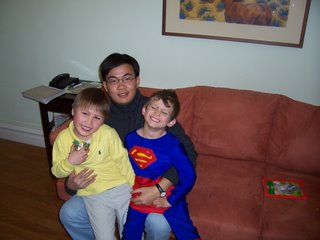 We have been using Mr. Leo , one of the Chinese teaching assistants from Eli’s class, to babysit. He is a very sweet man and the kids all love him. Anna calls him Mr. Lilo, as in the cartoon character. She loves having him read her Chinese books and put her to bed.

Last week, we were going out and Brandon Fosh, one of Eli’s best friends and our neighbor, came up to me in the afternoon and said, “Is Mr. Leo really coming to your house tonight?’

“Yes, Brandon. Would you like to come see him?”

So Brandon came over and he and Eli waited for Mr. Leo with the excitement of Dixie Doc awaiting a shipment of trumpets and Louis Armstrong CDs. When he arrived, the greeting was just as enthusiastic.

He has sat for us about three times now and while we still get a phone call or two throughout the night from Jacob and Eli, it is going well. No fits or meltdowns. Jacob makes up reasons to call – “I can’t find my shirt…. My stomach is a little upset.” He is going through an intense phase of not wanting to be alone and always wanting to be with us. He is also being exceptionally loving and well behaved, so all is forgiven.

That rosy report is overlooking the fact that he hit a girl in school two weeks ago. The ‘victim” Caroline Madden is a tough little cookie, both of whose parents are from Pittsburgh. She is the only other real American in Jacob’s class and they have a very intense love/hate relationship.

Jacob refused to apologize or admit any wrongdoing. Apparently, they had played some sort of team game in mandarin class and Caroline’s team won and she got up in their rack about it. “she was a sore winner,” Jacob said. “she kept saying, ‘We won! You lost!’ and some of the kids got really upset.”

So he cast himself as the valiant gladiator, which I’m sure is precisely how he saw himself. Anyhow, other than that incident, he has been really on his best behavior.

Black tie ball "I have a daughter! She is different than a boy."
Scroll to top