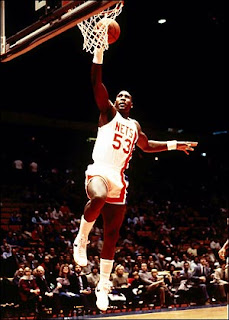 A lot of people wrote me asking about Darryl Dawkins since I posted that picture of he and I. Tonight, my friend Alan DeZon told me he flew back from Shanghai to NY on Double D’s plane. That all inspired me to dig this Slam feature out of the archives. I think it’s a classic of my oeuvre. It ran about 7 years ago.

Like them, Double Dee was a pioneer, the first baller to do many things that we now hold near and dear to our hearts. He was the first to shatter a backboard. The first to name his jams. The first to go directly from high school to the NBA. The Chocolate Thunder was also the first NBA player we know of to claim he was actually an alien from the planet Lovetron. It all added up to him recently being named “Man of the Millennium” by Saturday Night Live, edging out William Shakespeare and Albert Einstein.

But to explore that avenue any further would be to propagate the idea that Dawkins is some kind of joke, a hoops freak show to be laughed both at and with. And that’s too easy a path to take. Because something can be funny without being a joke, and that’s exactly the case when it comes to The Master of Disaster, Darryl Dawkins.

In 1975, Dawkins, a senior at Maynard Evans High School in Orlando, FL, announced he would go directly to the NBA to the snickers of many. Drafted fifth by the 76ers, Dawk did not set the league on fire his rookie year, averaging just 2.4 ppg. Still, he quickly developed into a solid low post contributor and by his second season, the Sixers were in the Finals, where they lost to Bill Walton and Maurice Lucas’s TrailBlazers. Dawkins and the Sixers would return to the Finals twice more only to lose. Fact is, they could- shoulda won either or the ‘81 and ‘82 series against Magic’s Lakers, which would have radically rewritten both the history of 80s hoops and Dawkins’ place in the basketball cosmos.

“Dawkins was an incredible physical specimen,’ recalls Bob Costas.” He was 6-11 and 275 pounds and no one had ever seen anything like him to that point. He was a manchild and everyone was actually terrified of him.”

Including the refs, who never gave the benefit of the doubt to the bad-ass-looking guy swatting shots, glaring down opponents and occasionally delaying games for hours while new backboards were installed. Dawkins led the league in fouls three times and still holds the record for most personal fouls in a season (386). By the end of his 14-year career, Dawkins relied largely on his muscle and ferociousness, a natural evolution for a guy who never met a confrontation he didn’t relish. But Dawk was no mere thug. He is the fifth most accurate shooter in NBA history with a field goal percentage of .572.

Post-NBA, Dawk spent five years playing in Italy and one as a Harlem Globetrotter. Now he has defied virtually all expectations by becoming a very successful minor league coach. The last two years, he has coached both the Pennsylvania Valley Dawgs of the U.S. Basketball League and the Winnipeg Cyclones of the International Basketball Association, for whom he also played last year. He has been coach of the year in both leagues.

Prowling the sidelines at a recent Valley Dawgs game, Dawkins cuts an imposing figure in his mustard suit, gold hoops dangling from both ears, his chocolate dome shaved smooth. On the court, his squad runs and presses mercilessly, driving their opponent into submission. Despite a commanding victory, Dawkins is stern in the postgame locker room, saying, “If the big guys can’t get it done, I’ll go out and find me some who can.” He doesn’t rule out suiting up himself to show the youngsters how it’s done.

Afterwards, in between flirting with departing dancers and making friendly, funny small talk with everyone from the Valley Dawgs owner to their ball boy, Dawkins gave some love to the only magazine that could ever truly appreciate his brilliance.

I’m a finalist, but… Halloween
Scroll to top