And here’s one for old time’s sake. Since Big In China came out – and really since we moved to China, way back in 2005 – people have asked about the travel with the kids and how we dealt with jet lag. I even have a chapter in the book that at least begins to deal with it… but going back and re-reading my posts from the days right after we returned from visits to the U.S. is pretty eye-opening. 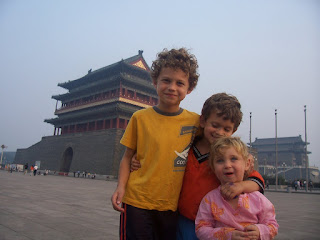 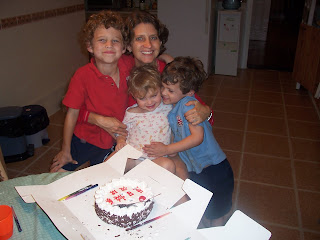 Day two… Anna woke up at 2:30 this morning, which means we got an extra hour or two of sleep, I guess. She came in bed and we put on Caillou on the portable DVD player. How did people survive without those things? Jacob joined her by 3 and Eli by 3:30. They all watched Dvds for a while. Becky went up and slept in Anna’s bed.

By 4 or 4:30, Eli and Jacob were fighting over the computer. By 5, I was on y third cup of coffee and was back working on the castle. By 5:30 Jacob had completed a giant Darda car track, using the couch as a launching pad, which brought back great memories of me and bro David making elaborate Hot Wheels tracks in the basement of 5450 Guarino Rd, using the piano bench as a starting ramp.

By 6 or 6:30, I had woken Rebecca up and handed over the reigns so I should get back in bed and rest if not sleep for an hour. By 8, Jacob was out the door to school and Eli was flopping all over the floor screaming that he wouldn’t go to school. He eventually said that he was trying to be late because he hated doing workbooks, which is how they start their day. You have to love the lack of guile.

He went totally boneless and refused to go to school, so I carried him over my shoulder and buckled him into the car and drove to school, only the second time I’ve driven. I just didn’t see any way to get him there on a bike. I arrived to find several of his classmates in similar straits. Rough week here, with a schoolful of jet lagged kids. And after three weeks, we have a week off for Chinese New years.

Meanwhile, the sky was eerie this morning as all this went down. It was grey and gloomy, almost purple and perpetual dawn-like. And with the thick haze of coal-fired pollution hanging in the air, the word that came to mind was purple haze. It was really quite eerie. I came home to change and headed back out to the gym to find it snowing. We eventually got maybe an inch of snow and when I picked the kids up, everyone was thrilled.. lots of snowball fights going on, kids sliding everywhere, laughing, crying out.

Both boys went to friends’ houses for playdates, which are perfect for keeping them up a while. Anna, meanwhile, somehow didn’t nap, though she generally does every day. We should have given ding explicit instructions but it didn’t seem necessary. She conked out at 5 pm. We tried to wake her around 6:30 to no avail. It is now 7:48 and I figure I have five hours before she wakes up so I need to head up.

Jacob fell asleep on the coach at about 7 and Eli had a nice dinner with us, ate a ton, talked, laughed, was in great spirits, then fell asleep right in his chair. I carried both of them up to bed.

Meanwhile, Becky is very busy at work and the Dow Jones general counsel arrived here tonight with a Deputy Managing Editor. They are here to do a seminar with the office tomorrow. So we’ll be running them around a bit this weekend. Must sleep, must sleep…

Before I go crash – third straight night in bed before 8:30 – one more funny thing. I am going to see the Backstreet Boys Monday night. We met a woman on the plane over who works for a promoter here. You can really do some great sourcing just on these plane rides, since they are filled with people coming over to do all kinds of business. She also invited us to se the stones in Shanghai in April. I just thought that the Backstreet Boys in Beijing was too good to pass up. May even be a column in there.

Making dumplings Pete Hamill on OSL, 9/11, the WSJ and more…
Scroll to top