What was it like to play Duane Allman’s guitar?
by Sonny Moorman

I had the thrill of my musical life last year when I got to play Duane Allman’s 1957 Goldtop Les Paul on a Macon, Georgia, stage.

I grew up listening to Lonnie Mack playing in bars around my Ohio hometown and have been greatly influenced by Eric Clapton, Jimmy Page, Jeff Beck, Jimi Hendrix, Johnny Winter, Roy Buchannan, Rory Gallagher, Peter Green, Carlos Santana and a host of others.

But it was the Allman Brothers Band’s Duane Allman and Dickey Betts who hit me the hardest. Their mix of rock, blues, jazz, soul and country improvised by virtuoso players just floored me — and it still does!

Willie Perkins, the ABB’s tour manager during their golden era, 1970 to 1976, has been my manager for the past 15 years. So the Brothers and their music have played a huge role in my life and career, which made playing Duane’s Goldtop a thrill and pleasure almost beyond words.

The 1957 Gibson Les Paul Goldtop, serial No. 7 3312, is relatively light for a Les Paul, with a big, rounded neck profile. It was refinished by Tom Murphy in 1997 at Gibson’s Historic Division and set up much as Duane might have played it, including the stringing “over” rather than through the stop bar (something I do on my guitars as well). This gives the guitar a nice, supple feel while sacrificing little if any of the famous Les Paul sustain.

I own and play a 1996 Gibson Historic Collection Les Paul Goldtop R7, which I’m elated to say is very similar to Duane’s guitar in appearance and feel. Duane’s is a bit lighter, perhaps because the pickguard, pickup switch ring and pointers have been removed, but the guitars looks and feel virtually identical. Here’s a pic by E.J. Devokaitis , the curator of the Big House Museum of me with both guitar

This Goldtop is Duane’s voice on the first two ABB albums (The Allman Brothers Band andIdlewild South), as well as on Derek and the Dominos’ Layla sessions.

Even un-amplified, the guitar truly speaks in a lively resonant voice, as I learned sitting outside the back door of the Cox Capital Theater in the quiet of the Georgia night with Willie Perkins by my side: Any Duane fan would have recognized that guitar in the dark! It had the same tonal character in that Macon alleyway that it has on all of those famous recordings. After listening to that guitar thousands of times, I could barely believe it was in my hands and I was going to play it on stage.

I played my Gibson Flying V through my reissue Marshall model 1962 Bluesbreaker as we played songs from our Atlas Records CDsLive as Hell and More Live as Hell for about an hour (for that part of the show). Drummer Dave Fair, bassist Chris Perreault and I were loving the crowd and having a fine night. And then it really got special, as Willie came onstage bearing Duane’s guitar. He said, “This is my friend Duane Allman’s guitar, and I carried it all over the country, but my friend Sonny Moorman’s gonna play it tonight.”

I then invited Berry Duane Oakley, son of original ABB bassist Berry Oakley, to play with us. He came out carrying his dad’s “Tractor” bass, plugged in to Chris’s Ampeg SVT, and we started into the ABB classic “Dreams.” After that, we rolled right into “One Way Out.” Videos of both are at the bottom of this post.

I had been worried I would be too nervous to play this iconic instrument — that I would freeze up and choke at the prospect — but its current owner, Scot LaMar, had admonished me to “Play it like I stole it,” so I dedicated myself to giving it my all. From the moment I first picked it up, it could not possibly have seemed more natural for me to play that guitar. I felt absolutely and totally at home!

It was a special pleasure to play it alongside Berry Duane Oakley, who is truly his father’s son! I’ve never heard ANYONE other than his dad play those songs with the kind of feel, fire and emotion that he delivered, and the combination of Dave and Berry’s stellar playing and the magic of Duane’s guitar truly made a dream come true for me.

What was it like to play Duane Allman’s guitar? Man, we were hittin’ the note!

and we rolled right into “One Way Out”:

My very special thanks to Scot LaMar, E.J.Devokaitis, the Big House Museum, Dave Pierson, GABBA, and of course, Willie Perkins, for making this happen. 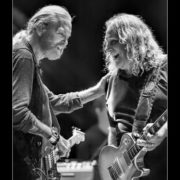 Allman Brothers Announce 4-disc set due in May
0 replies