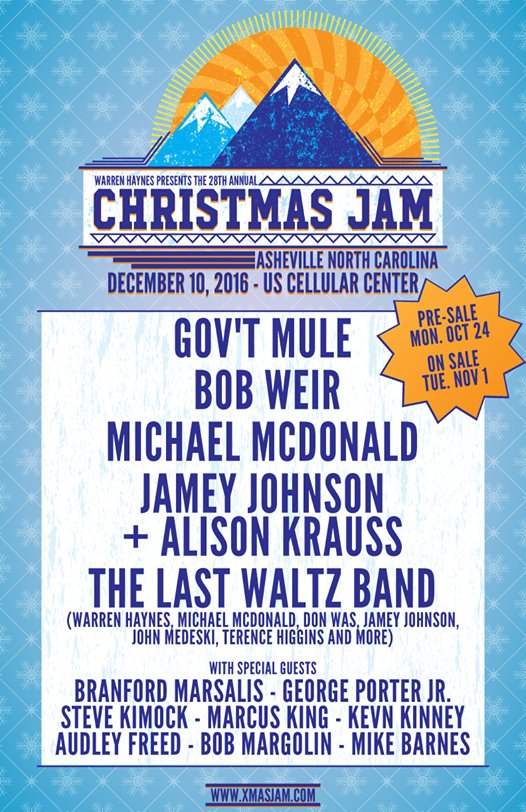 PRESS RELEASE: Warren Haynes’ 28th Annual Christmas Jam returns on December 10,2016 to Asheville, NC’s U.S. Cellular Center. The Jam  brings together the Asheville community with performing artists, volunteers and friends from all over the country to raise funds for the Asheville Area Habitat for Humanity. For the 18thyear in a row, proceeds from the Jam will go toward constructing energy-efficient new houses (33 houses have been built so far with 25 more on the way) as well as purchasing and developing land for entire Habitat subdivisions. To date, more than 2 million dollars has been raised by the Jam for the Asheville Area Habitat for Humanity.
This year’s line-up: Gov’t Mule, the Grateful Dead’s Bob Weir, Michael McDonald, Jamey Johnson + Alison Krauss andThe Last Waltz Band, with the evening’s special guests Branford Marsalis, George Porter Jr., Steve Kimock, Marcus King, Kevn Kinney, Audley Freed, Bob Margolin and Mike Barnes with more to be announced.
The pre-sale including VIP tickets and travel packages begins October 24th.  The public on-sale begins November 1st. For the first time ever, a limited number of reserved seats in the balcony of the arena will be made available, offering a guaranteed seat for the entire 7+ hour show with the flexibility to also go downstairs and enjoy the show on the floor. The floor and the majority of sections upstairs will remain General Admission.
This year’s Jam-goers can look forward to Grateful Dead founding member Bob Weir returning to the Jam stage for the first time in 14 years, while Alison Krauss makes her first-ever Jam appearance, performing with Jamey Johnson and his band, and in addition to his involvement in The Last Waltz Band, Michael McDonald will lead a one-time only Christmas Jam all-star ensemble. Following two sold-out shows at New Orleans’ historic Saenger Theatre during Jazz Fest, The Last Waltz Band will be reuniting for a special third performance. Haynes will lead an all-star band consisting of Michael McDonald, Don Was, John Medeski, Jamey Johnson, Terence Higgins and more as they pay homage to the 40th anniversary of The Band’s legendary 1976 farewell concert. This year’s incredible line-up of artists will come together for an electrifying night of music that promises to deliver more unique pairings and unforgettable musical moments than ever before.
In addition to the main event, there will be numerous daytime activities for guests to take in. “Xmas Jam By Day” concerts will take the Asheville Music Hall and One Stop and feature special collaborations alongside some of the best local musicians. The annual art show will be held at the Satellite Gallery and feature some of the best photography and poster-art in music. Attendees will also have the opportunity to give back during the annual “Before The Jam, Lend A Hand” event where fans, staff and artists come together and volunteer to help build the houses made possible by Christmas Jam donations.

Dickey Betts on the term Southern Rock
Scroll to top