I’m really looking forward to celebrating the launch of One Way Out: The Inside History of the Allman Brothers Band at home in Maplewood TOMORROW night. (2/22)

As you know by now, book is the result of 25 years of reporting, interviewing, thinking.. so very satisfying to have it out there and being well received. It came out three days ago and I’ve been running ragged doing interviews, coordinating this and that, blah blah blah… Now I’m ready to do this with my people.

•Reading/Talk/signing at Words at 7:30 followed by party at Highland Place. (And they are running some specials if you bring a receipt from Words.)

My Big in China band will be playing fortified by some special guests:

•Guitarist Andy Aledort, who has played with Dickey Betts Great Southern for a decade, and has also performed with Band of Gypsys (they call him “Andy Hendri”x in Japan, where he headlined the Mt. Fuji Festival); Steve Vai, Buddy Guy, Joe Satriani… too many to name. He was also Musical director of the first few Hendrix Tribute tours. He’s the best and all that time with Dickey has him playing slide about as close to Duane as you’ll hear from anyone anywhere.

•Keyboardist Mark Alexander just came off the road with the Rascals. He has toured and recorded extensively with Joe Cocker, Meat Loaf, Enrique Iglesias and many others. He was a founding member of Little Steven and the Disciples of Soul. Another first-call guy we are very honored to have in our midst.

More guests to come as well. Come on by.

Much more information on the book, including links to reviews in Rolling Stone, Parade, Guitar World and other pubs here. 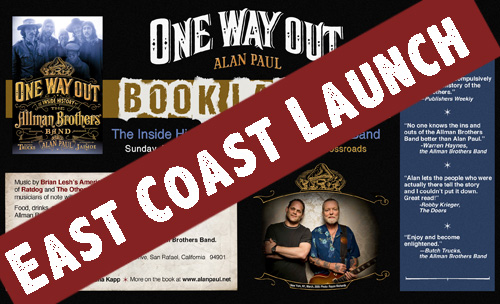 Promo video for One Way Out