I was enthralled watching the live stream of last night’s White House celebration of the blues, the music which has been so central to my career and my life’s soundtrack. Mick Jagger was a big draw, of course, but he doesn’t mean that much to me, especially in light of the other artists there. Buddy Guy and B.B. King would be two heads on my Mt. Rushmore of music. Buddy was the first musician I ever interviewed, for the Michigan Daily in 1985, in preview of a show at Rick’s American Café, where I also worked. That performance changed me from being a blues lover to a certified blues freak. And it changed my career arc, from writing about literature and fine art to following my passion and writing about music and musicians. 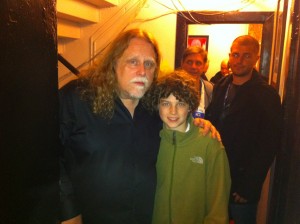 Warren with my Jacob.

And Warren Haynes and Derek Trucks have been central to my musical life for 20 years. The guitarists helped revitalize and fuel the Allman Brothers over the last 20 years and I have spent countless hours listening to them perform and have probably interviewed the two of them for Guitar World more than anyone else. Anyone who has read Big in China knows that I regularly perform Warren’s song “Soulshine” and that it holds special meaning for me. I’m proud to call him a friend.

To see all of them – plus other musicians I love and admire – performing in the White House, a few feet away from the president and first lady, was powerful. I literally could not walk away, even when it was time to put the kids to bed. And to see Pres. Obama get up and sing a few lines of “Sweet Home Chicago” just blew me away. Imagine how B.B. King, born in Mississippi in 1925, must have felt. He certainly looked delighted, as did Buddy. 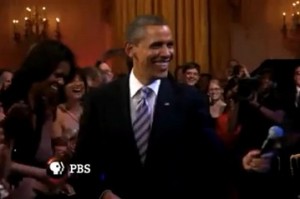 It’s certainly a million miles away from Mitt Romney dryly reciting the lies to “America the Beautiful,” much less Rick Santorum essentially proclaiming America a modern day Gommorah. The main point of this post is not really political, but this really highlights a crucial difference in worldviews and cultural sensibilities. Take your pick.

8 y.o. Anna wisely asked me if the president singing was pre-planned. I’m still not sure, but Buddy is the one guy who would dare to hector the pres.

Watch it and weep:

Derek Trucks on why he’s leaving the Allman Brothers Band: “Sometimes you just have to step away.”
5 replies