There is no easy answer to the common question of how long it took to write One Way Out: The Inside History of the Allman Brothers Band. I worked on it full-time for about 18 months after signing with St. Martins and I worked for a good six months before that putting it into the original, self-published eBook. That version was based on interviews I had already done over the years and was pretty good, but I knew there were gaps. When I began expanding it, I thought filling those holes would be a tidy process, but as I started to do interviews, I realized I had to let go of my preconceptions and see where the interviews took me. It became a much more involved process than I originally envisioned – and it made for a much better book.

I spent many hours over several trips poring through papers at the Big House Archives in Macon. I made a list of people I wanted to speak to which stretched close to 50. They were listed on a white board behind my desk and I started crossing people off one by one. I ended up speaking with most of them, some repeatedly. Harmonica player Thom Doucette and Berry Oakley’s wife Linda  – known to all  in the day as Beeg Leenda – were revelatory in their insights and inspiring in their willingness to open up. They helped me understand the band and the relationships far better. As much as anyone, Thom and Linda brought Duane Allman and Berry Oakley to life for me – and I hope I did so for you.

Some interviews led me to other people not on my list, like Jon Landau, famous for being Bruce Springsteen’s longtime manager, but also the guy who facilitated the ABB’s first Northeast gig, at the Boston Tea Party in May 1969. Tea Party Manager Don Law, Boston concert kingpin, sent me to Jon. Neither of them do interviews, but they were happy to recount their involvement with the Allman Brothers. So I kept calling and emailing people and getting great interviews: Chuck Leavell, David Goldflies, John Scher, Danny Goldberg,  Zakk Wylde, John Lyndon, Jonny Podell, Kim Payne, Rick Hall, John McEuen, Kirk West, Oteil, Marc, Derek…and on and on. All of the current band members as well as Dickey Betts also continued to lend deeper insight to earlier interviews I had done. Butch Trucks, Jaimoe and Warren Haynes were particularly available to help clarify various things. Before I began the process, I thought I knew most of what there was to know about the Allman Brothers Band, but that was hubris. No piece of writing can have real depth until the writer knows far more than he or she can put down on the paper. Getting there was a long, slow, invigorating but exhausting process.

Last March, during the annual Beacon run,  I interviewed Derek Trucks in his New York hotel room. He asked how the book was going and I told him it was taking a pound of flesh. He replied, “Any worthwhile project does.” And that was a valuable thing to remember. When things got bogged down or I was working late at night or frustrated that I felt I was doing a bad job at other aspects of my life, I would tell myself, “Any worthwhile project takes a pound of flesh, so quit complaining and get back to work.” 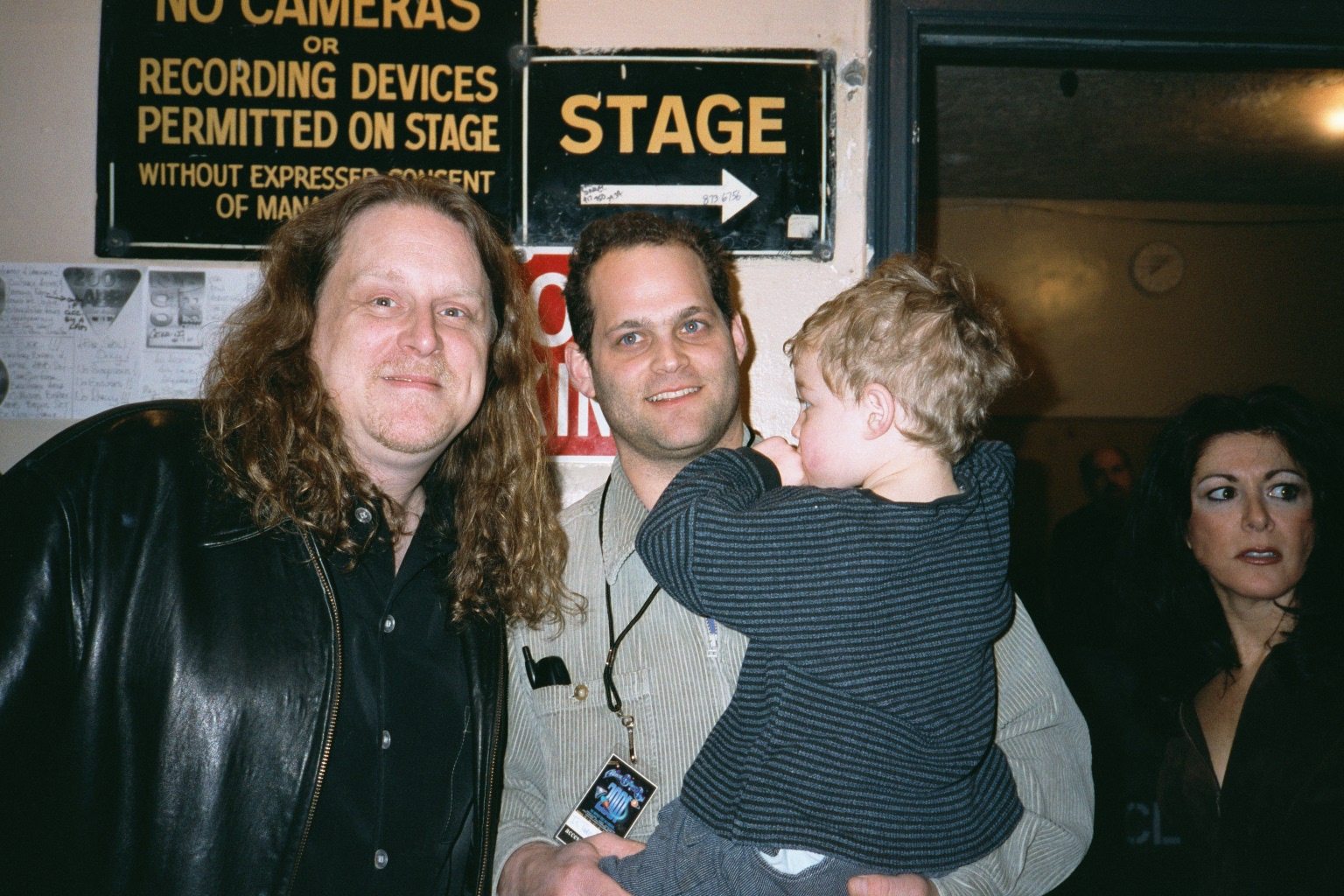 Backstage at the Beacon, long ago…That boy I’m holding is about to turn 16.

I was also inspired by the approach Butch told me Duane had instilled in the band: “If you’re going to have a band, why not try to be the best one out there?” If I’m devoting my life to writing a book, why not try to make it the best one out there? I expanded my scope and vision and got more ambitious. I wouldn’t honor the band and music I love unless I was willing to lay it all on the line.

The interviews included in One Way Out go back to 1990, which is the first time I did a story on the band – a story that changed the direction of my life. I was sitting around my hovel in New Port Richey, Florida, eking out stories on training attack dogs and covering high school baseball for the St. Petersburg Times, driving all over rural Pasco County to call in one paragraph stories: “James Jones struck out 8 as the Kingfish pulled out a 2-1 victory…”

I was about to give up on being a writer and go to grad school to become a teacher. Then Seven Turns came out, I was assigned to write about it for Pulse magazine and I threw myself into it like a starving man at Thanksgiving dinner.  I bought the 4-CD Dreams box set and re-engrossed myself in the music, growing ever more obsessed. The story I wrote was the best thing I had ever done by a wide margin. It led to me being hired as Guitar World Managing Editor. I never finished my grad school applications.

That wasn’t the first time that writing about the Allman Brothers altered my arc. In 8th grade Social Studies class, I had to write a biography of a great American, and I chose Duane Allman. My teacher Miss Zach returned that paper – which I sure wish I had a copy of – with an incomplete and a note to see her. I thought she was going to tell me Duane was not a suitable subject and I had to try again. But she only questioned if I really wrote it. “It’s awfully good,” she said, suspecting my high school senior brother David.

I convinced her I wrote it, and my mother backed me up. This was one of the things that made me feel like I had some talent, that maybe I really could be a writer. So the Allman Brothers are all tied up in my whole sense of who I am and what I wanted to do – and could do – in life. 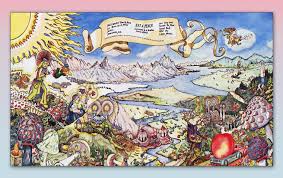 Sitting in David’s room listening to Eat a Peach, the psychedelic gatefold artwork drew me in almost as much as the music. I didn’t know what was going on there, but I was sure it was more interesting than life in Pittsburgh and I wanted a piece. I mentioned this story in an NPR interview a few years ago about my first book, Big in China, and then I got an email from the artist, W. David Powell, who happened to hear me. He couldn’t believe what he heard and I couldn’t believe I was getting a thank you message from the guy who designed the cover of Eat a Peach – a veritable holy man! We struck up an email friendship, and I have an original piece of art in that same vein from David in the end pages of the book. It was commissioned by collector Jack Weston, who shared it with me. It has special meaning to me, but you don’t need the same history to appreciate this work, which I can’t wait for you to see.

One Way Out: The Inside History of the Allman Brothers Band is not just a book I decided to write because I needed a project, or I could get a deal. It’s the end result of a lifetime spent thinking about, talking about, listening to – and enjoying – this band. It’s been mine, but on February 18, it becomes all of yours. I hope you like it.

Special Preview – “Revival” from the upcoming CD Play All...

Promo video for One Way Out
Scroll to top