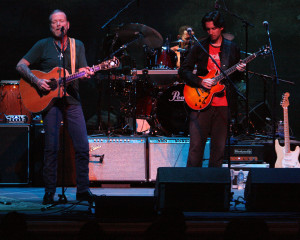 I interviewed Scott Sharrard, who played guitar with Gregg Allman since 2008 and became the musical director in 2015, for my Guitar World tribute to Gregg. I could only use a couple of quotes in that piece. An edited version of the rest of the story is here. Though I have been listening to an advance copy of Gregg’s Southern Blood

for weeks, this interview was conducted before I had heard it.

Gregg’s health was up and down in the last few years, which led to cancelled shows. People always talk about playing each performance like it could be your last, but I wonder if you had a sense of him really thinking about that.

It definitely got more intense. He always had a certain ethos to playing. Certainly, no one could ever question his dedication. That guy fought to he last to go on stage is what I think. He was fighting against all odds and very few people knew that, because that’s how he wanted it.

The second to last show I played with him was at Red Rocks and he was having tremendous breathing problems, struggling with the altitude there. The guy would insist on making the gig! He would not take no for an answer. That night he was backstage and could not move. We had to carry him to the stage and then he picked up the guitar and the songs were slow but they were magical.

Yes, and the first with the full band in a while, so we were all very happy. The first four songs he came out like a lion and the whole band was basically high fiving. As the show went on, his and power pitch started to diminish. I had a feeling that was it. They tried to bring him to New York for the 20 shows at City Winery but he was unable to stand up and perform.

He literally was torturing himself so he could be on stage and give a show for his fans. I can tell you 100 percent that he did not want to ever stop performing. If he could sing a note, he did it. He performed until he literally could not sing a note. That was last November and from there he went into an inevitable health decline.

The lead single of Southern Blood

, co-written by Gregg and Scott;

Gregg once told me the difference between the Allman Brothers Band and the Gregg Allman Band as “the big amp thing” and “the small amp thing.” Did you guys explicitly discuss what he wanted in that regard?

Yes, but not exactly like that. He would say all rock and roll is Southern Rock, so the whole designation of Southern Rock was BS to him. He basically saw it as he was playing rhythm and blues, blues and soul music but coming out of him it was rock and roll. He would always say that’s the way it started with Duane but somewhere along the way Duane got into Cream and psychedelic rock and it took the music to another place

So Gregg always considered his solo band to being a return to where he and Duane started, before his brother got into psychedelic rock. That’s how he talked about it.

He saw the band as his ultimate dream realized. Once he retired the Allman Brothers and put that to bed, he just poured it all into his band. It was interesting to watch. A lot of people thought I would be happy about all that, but at the last show, I was honestly very sad to see it go. I always hoped he’d keep it going and do both bands because I love the Allman Brothers Band very much. But it was also cool to see him devote everything to one band. He said many times he thought this band we had at the end was the best he ever had. He told us that every day and he was so happy about it.

That’s quite a statement.

I think once Duane died it really shattered him on many levels and he shut down a lot. Certainly we saw Dickey jump into the fray and grab the baton in the 70s and it led the band to its greatest success. Though very different, Dickey is also very song oriented – think “Rambling Man” and “Blue Sky” – but it moved away from Gregg’s music, I guess. The band went through a lot of things and I think Gregg kind of shut down and withdrew, at least until the 90s.

I was just listening to “Ain’t Wasting Time No More” from the Back To Macon, GA

album and it’s a really good example of how you guys rearranged an Allman Brothers song, replacing guitar solos with sax solos.

I put that arrangement together because Gregg really loved having Art [Edmaiston] and Jay [Collins] play sax solos. They are very different players. Art is a Memphis guy with a big tone. Jay is more of a New York guy. What I tried to do with the horns is approach the tenor saxophone as the other guitar so if you’re playing any Allmans tune, I would use Art or Jay as my foil a la Dickey and Duane. And that’s easy for me because easily my biggest influences in improvising are Miles Davis, King Curtis, Maceo Parker and Junior Walker. I’ve learned more saxophone and trumpet solos note for note than guitar solos. Gregg liked that and he was very supportive of my style.

The bond we had really in common was the blues. When I was still pretty young, I was in clubs in Milwaukee playing with Pinetop Perkins and Hubert Sumlin. I came from school of learning real blues from the real dudes, and that’s something he would comment on. The blues was his grounding whether it was “Melissa,” “Whipping Post” or “Ain’t Wasting Time.” They all have different grooves and feel and structures but the blues was the ground floor of anything he did. It was always the base.

How direct was Gregg in his directions to you as a guitarist and musical director?

When he wanted something he was very direct about what he was looking for. He would also take the time to assess what was happening. He was patient and one of the hallmarks of Gregg is he was very careful with his words. He was very sensitive to how other people felt to criticisms or suggestions and extremely sensitive to very subtle creative things, like the dynamics of a band. And when we were doing songwriting together especially, he was very sensitive about honoring the intent.

What he would do to my lyrics would change the perspective and mood to fit his style and, of course, working with him in that way was a thrill and an honor.

I spent a couple days with him a few weeks before he passed away. We had a really intense hang at his house and I’m going to keep those memories to myself for now but it was really, really special and I am very happy we had that time. I brought him a gift that was very special to me and we had a very special bonding and hang and I was granted a very rare opportunity to see someone who started out as a hero of mine and became an employer, a mentor and a friend and I was able to express to him all that. We were able to heave a lot of laughs and I could ease his pain, so I feel very good about all that.

That’s wonderful. And it must have been very emotional to return South for his funeral just a few weeks later.

Yes, of course. Going to his house and funeral and burial was also a very intense experience and realizing I’ve actually become part of the family was just… to feel like you belong to a band like that, it’s overwhelming and very empowering.

Gregg played a lot of guitar in his band. How would you describe his playing?

His acoustic guitar playing has been well established and really cool, particularly when he was playing with fingerpick, as on “Midnight Rider” and “Come and Go Blues.” On those tunes, his voice and acoustic guitar became the vocal point of the arrangement.

On electric, he was more in support . We would bear the weight of doing the arrangements and he would put his guitar on top of that. He was a really complementary player. The way he played reminded me a lot of Jimmy Reed. That was our template, actually. The first thing I learned was a Jimmy Reed 12-bar pattern and same with Gregg: “Baby What You Want Me To Do” is how it started for him.

So what’s next for you and the Brickyard Band, Scott?

I will be honoring Gregg by creating new music in the ethos and in the mold that he and his brother set down. You’ve got to acknowledge there will not be another one of those. Gregg and Duane and the Allman Brothers Band just stand alone.

This is a moral imperative for a musician; we have to give people the songs they need and work much harder to find originality that’s rooted in tradition. That’s what Duane and Gregg did, and that’s how you honor them.