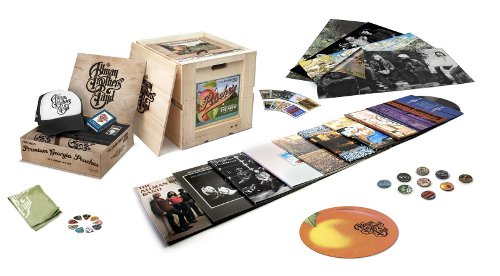 On July 22 Mercury/UM will reissue nine classic The Allman Brothers Band albums on 180-gram vinyl. The albums span 1969 to 1979 and will be remastered from the original analog tapes for the upcoming vinyl release. There will also be a limited edition set presenting the nine albums on 15 LPs in a specially made wooden crate limited to 500 pieces.

Engineer Kevin Reeves remastered the LPs to 192kHz/24-bit audio and they were cut on copper plates using Abbey Road Mastering’s Direct Metal Mastering (DMM) lathe. The label aimed to faithfully replicate the original album artwork for each release. The previously mentioned limited set in wooden crate will also include a number of collectable extras in addition to the albums such as a USB stick featuring downloadable uncompressed audio files of the music found on the remastered LPs, a throwback ABB hat, a turntable mat and more.

The limited edition box set is available for pre-order here.