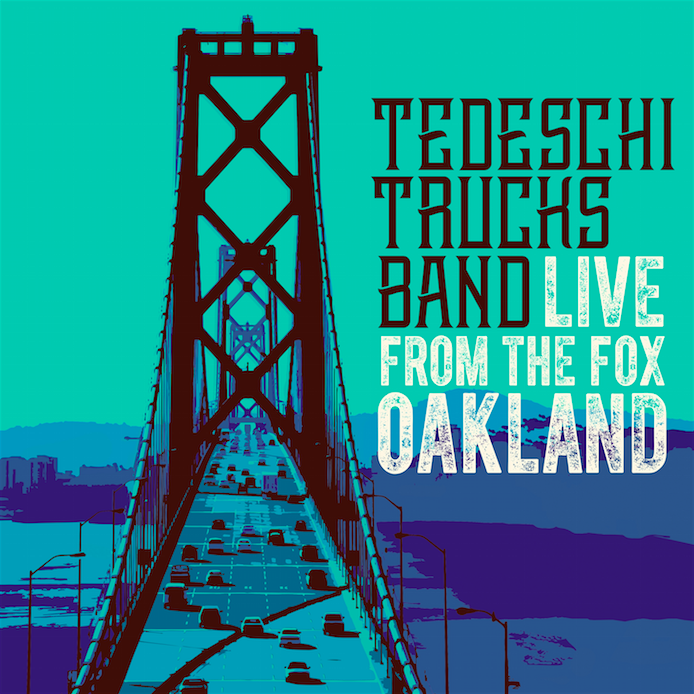 “A new peak in the continuing story of a great American rock & roll family band.” – From album liner notes by David Fricke

The film also features extensive behind the scenes footage, including Derek’s recent visit to Marc Maron’s garage for the WTF! Podcast (http://bit.ly/2jDCZAN), and an interview with Derek and Susan conducted by Rolling Stone critic David Fricke for SiriusXM Satellite Radio

Filmed and recorded in a single night, September 9th, 2016, at Oakland, CA’s gorgeous Fox Theater, the concert film and audio were mixed using a vintage Neve console to achieve an exquisitely immersive sound experience, and mastering guru Bob Ludwig added his craft to the full 5.1 surround sound mix and album audio. The film was produced and directed by Jesse Lauter (Bob Dylan In The 80s: Volume One) and Grant James (Father John Misty) with Trucks continuing in his role as producer on all music elements. ‘Live From The Fox Oakland’ will be released in multiple formats including vinyl, DVD and Blu-ray

You can preorder here.

In another memorable segment, sarod master Alam Khan joins TTB onstage for the first time on their original song “These Walls.” This genre-defying moment reveals TTB’s classical Indian influences and proves the 12-piece ensemble can drop their sound down to a whisper when it serves the song.
‘LIVE FROM THE FOX OAKLAND’ FILM TRAILER

For a band that spends hundreds of days on the road a year, it was important to choose the right time for their second live album. As Trucks explains, “we’ve been wanting to properly document the progress of this band for a while and it really felt like we were hitting our stride and firing on all cylinders last fall.” Tedeschi adds, “it was special capturing the live performance from Oakland. The audience was great and the band played with passion. I am thankful we captured the band at this moment in time.”

Trucks and Tedeschi’s full commitment to making the best sounding live recording possible was evident from start to finish. “Our engineers Bobby Tis and Brian Speiser have been tweaking our recording setup on the road over the last year so we can really capture the sound of being in the room,” says Trucks. “The three of us spent countless hours in our studio after the recording to bring the tracks to life and make sure you can hear all the energy and nuances, which isn’t easy with a 12 piece band. We put a lot of work in to make sure the mixing/mastering was a notch above and I think our fans and music deserve the extra effort.”

Film Track List
Don’t Know What It Means
Keep On Growing
Bird On The Wire
Within You, Without You
Just As Strange
Crying Over You
Color Of The Blues
These Walls (featuring Alam Khan)
Leavin’ Trunk
I Pity The Fool
I Want More (Soul Sacrifice outro)
Let Me Get By
You Ain’t Going Nowhere

The 45th Anniversary of Eat A Peach
Scroll to top